First, New Yorkers cheer and applaud as their state enacts a law to allow abortion up until the time of birth, and declares a person as “a human being who is born and alive.”

This week, a Virginia delegate proposed a bill that would allow an abortion to occur up until birth, even when the pregnant woman already is dilating and in the birth process. Watch the proponent of the legislation answer the key question: So how late in the third trimester would you be able to do that? (click on image below)

Then watch the Virginia Governor defend the bill . . . and promote infanticide (click on image below): 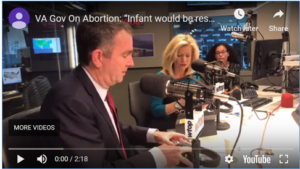 “This is morally repugnant,” Sasse said of Northam’s comments. “In just a few years pro-abortion zealots went from ‘safe, legal, and rare’ to ‘keep the newborns comfortable while the doctor debates infanticide.’ I don’t care what party you’re from — if you can’t say that it’s wrong to leave babies to die after birth, get the hell out of public office.” 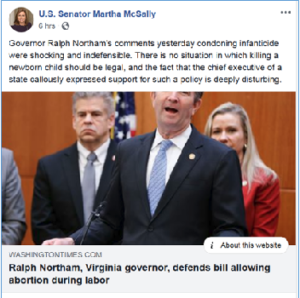 It’s been known for years that pro-choice really means pro-abortion at any stage of pregnancy for any reason. It’s also been clear since the Roe and Doe v. Bolton decisions 46 years ago that one could have an abortion up until the time of delivery if health-of-the-mother reasons could be manufactured. We’ve often said that a woman could be in one hospital room desperately trying to save her baby’s life while a woman next door could be ending her baby’s life legally and with medical assistance.

The news is the openness with which the pro-abortion community is expressing their real views.

And, thankfully many Americans are waking up to the reality of abortion-on-demand is very close to infanticide. The Christian news satire website, Babylon Bee, spoke truth not satire when its headline read, “In Rare Moment of Honesty, Democrats Finally Admit They Support Infanticide.”

While Arizona Democrats have yet to introduce the New York or Virginia measures, they’ve come very close as they file bills to repeal many of Arizona’s pro-life laws. The proposed bill show a lack of regard for women’s health and safety in addition to a denial of the humanity of the preborn child.

For example, pending legislation would:

Then, of course, there’s the proposed ratification of the Equal Rights Amendment to enshrine abortion rights in the U.S. Constitution.

You will hear from me over and over again between now and November 2020 that New York and Virginia could happen in Arizona if we don’t renew and expand our efforts to defend life for preborn babies and their mothers. The margins are extremely close in our current legislature.

I’ve sent you this email from our CAP Action. Our effort to rebuild a strong pro-life majority in the Arizona Legislature starts this year. To make a non-tax deductible donation for those efforts, click here. Help us keep Arizona the number one prolife state in the nation and not the next New York, California, or Virginia.